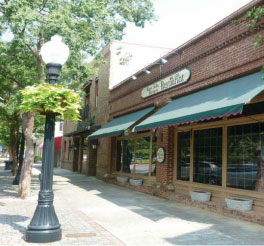 Aiken, South Carolina has long been a magnet for people seeking the solace of a simpler, healthier lifestyle. Shortly after the railroad arrived in 1833, wealthy Charleston residents chose to spend months at a time in the small but vibrant town, escaping the sultry, mosquito-ridden summers of the Carolina coast.

Later, affluent northerners, enamored by its mild climate and almost total lack of freezing precipitation, spent near-balmy winters in “The Garden of Eden of the South.”

Nearly a century-and-a-half later, the allure of Aiken remains strong, especially for retirees looking to live life to the fullest by escaping the frigid winters and frustrating traffic prevalent in the cities of the Northeast, upper Midwest and California. Weather is a major factor in their search for a better life, but so is Aiken’s location. The mountains are nearby, as are the beautiful beaches of the Carolina Lowcountry, and Aiken is only 17 miles from Augusta.

But there’s much more to Aiken than magnificent weather and natural beauty. A town of approximately 30,000 people, it offers its residents and visitors historic charm, tree-lined streets, an array of shopping and dining establishments, a highly-rated hospital and a branch of the University of South Carolina. Often called “the most unique city in the country,” Aiken served as the backdrop for F. Scott Fitzgerald’s novel, “The Great Gatsby.”

Nearly a century-and-a-half later, the allure of Aiken remains strong, especially for retirees looking to live life to the fullest by escaping the frigid winters and frustrating traffic…

Just as important is the area’s low cost of living, highlighted by affordable real estate and property taxes that are among the lowest in the nation.

Culture is an integral aspect of the appeal of Aiken. The Etherredge Center, the home of the Aiken Civic Ballet and the Aiken Philharmonic, hosts theater, musicals and concerts, while the Aiken Center for the Arts features five galleries, a learning center for art, music and photography classes and a 200-seat lecture-style theater.

Several national organizations have recognized the unmatched mix of weather, location, culture, entertainment opportunities and low cost of living that have combined to make Aiken an excellent place to live. The town has claimed the All-America City Award from the National Civic League and has been called a great place to retire by Money Magazine, Kiplinger Magazine and Century 21 Real Estate. Aiken also has been cited as a “Distinctive Destination” by the National Trust for Historic Preservation.

A visit to this picturesque Southern town, with its wide streets and magnificent magnolias, ancient live and oaks and towering pines, will provide all the proof necessary that Aiken hasn’t lost its luster for retirees and others seeking the perfect place to put down roots.